Not all that have fought and died for this country did so in the military. There are many unsung heroes and martyrs who gave their lives on our own soil to make this a better place.

Minister James Reeb is one of them.
His story should be known.

On March 7, 1965 in Selma, Alabama, marchers were beaten with night sticks by Alabama State troopers when they crossed the Edmund Pettus bridge. They were trying to march from Selma to the state capital in Montgomery to gain fair and equal voting rights in Alabama for African Americans.

That night, Dr. Martin Luther King Jr. went on national television and asked clergy across the country to come to Selma to support their cause.  Dr. King pleaded that if you were a true servant of God, you would answer the call to come to Selma.

Minister James Reeb was a father of four, leading a congregation in Boston. When he heard King’s plea for help he kissed his wife and kids goodbye, got on a plane and headed to Alabama. He went despite his wife begging him not to.   Rather than cower in fear, he ran toward the danger to do what was right and to stand for others.

On  March 9, 1965 Reeb dined with other ministers at an integrated restaurant in Selma. While leaving they were attacked by four members of the KKK. They were beaten with clubs. Reeb took several blows to the head. When they left the Minister’s lying bloody in the street, one of them said “Now you know what it feels like to be a real Ni####.”

Several hospitals in the area rejected him. It took nearly 6 hours to find one that would provide care to him.  On March 11, 1965, James Reeb died. 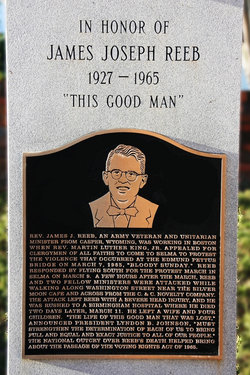 Three men went on trial for the murder. A fourth fled to Mississippi and never faced trial. Multiple witnesses identified them in court. The men had bragged around town about the murder.

The all white jury deliberated for 95 minutes, and all three were acquitted.  No one ever served a minute of prison time for the death of James Reeb.