115 years ago today, a man who changed the lives of millions of children was born.  He would sell over 650 million children’s books and help millions of children fall in love with reading, thereby handing them the keys to the universe.   His real name was Theodore Geisel, but you probably know him better as “Dr. Seuss.”  Nearly everyone knows the story and impact of Dr. Seuss and his children’s books, but few know that we was once an important soldier for Uncle Sam.  His battlefields were the hearts and minds of Americans, his weapons were his pen and brush.

On September 1, 1939, Dr. Seuss was working on his fourth children’s book, titled “Horton Hatches the Egg” when he heard the terrifying news that Germany had invaded Poland, marking the beginning of World War Two in Europe.  He was angered, horrified, and tremendously concerned that America was not taking the either the Nazis or the Japanese Imperial Army seriously enough.  In early 1941, he began working for a liberal New York Magazine titled “P.M.” as a political cartoonist.  By the summer of 1941, he was averaging 7 cartoons per week in the magazine.  Readership was not high because the magazine was selling for five cents an issue ,a pretty hefty sum in a country still trying to claw its way out of the depression. Still, he was doing all he could to sound the warning bell.  He published over 400 political cartoons in the magazine.   He took aim at the “America First” movement of people who wanted the United States to stay out of foreign entanglements.  His favorite target was Charles Lindbergh, the famed aviator and perhaps the biggest supporter of the “America First” movement.

Here are some examples of his work:

In 1943, at age 38, Geisel volunteered to enlist in the army.  He joined famed director Frank Capra’s “Signal Unit” in Hollywood.  The Fox Studio there became “Fort Fox”, as actors, writers, and other artists went to work to contribute their talents to the war effort.  With the help of several other famous stars, he began writing training  manuals and short animated films  for the army, including what would become a famous character, Private Snafu.  “Situation normal all fouled up” is where the word snafu comes from, and Private Snafu would make many stupid mistakes that were to be learned from by the young G.I.s.

He was also one of the driving forces behind appealing to the civilian population of the United States to do its part by conserving resources and buying war bonds. 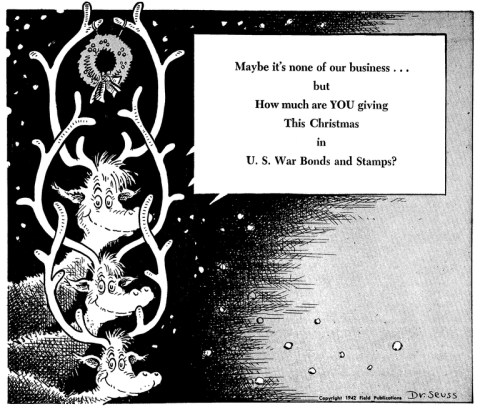 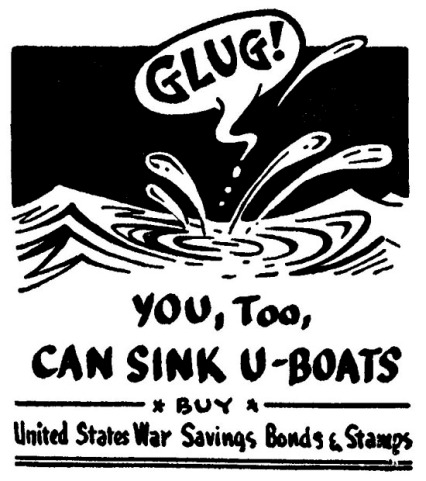 It should also be pointed out that Dr. Seuss was not above prevalent racism against the Japanese people and Japanese Americans themselves.  His portrayed them with large buck teeth and squinty eyes, playing into the worst of racial stereotyping.  After the war he would regret this and apologize. 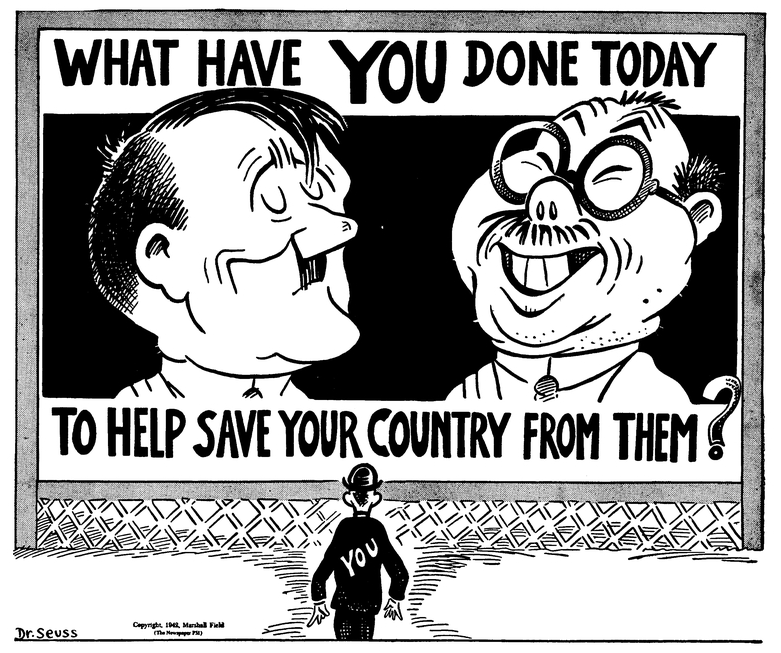 In 1944, he produced a film titled “Your Job in Germany”, which was an instructional piece on how American military personnel were expected to conduct themselves after the eventual German surrender.  He was sent to Europe to screen the film for top American Generals.  He arrived at almost the exact time that the Battle of the Bulge, Hitler’s last major counteroffensive began.  Geisel was trapped ten miles behind enemy lines, and it took three days before he was rescued by British forces.

After serving three years in the Military, Dr. Seuss returned home.  He was given the the Legion of Merit award for “exceptionally meritorious service in planning and producing films, particularly those utilizing animated cartoons, for training, informing, and enhancing the morale of the troops.”

No, he was not perfect, but you have to respect him and so many others who pushed big paychecks to the side to serve their country.

The Strange Story of the Battle of Los Angeles:
https://theunfinishedpyramid.com/2019/02/24/the-strange-story-of-the-battle-of-los-angeles/