Another football season became became part of history yesterday.  Many people spent today complaining about the lack of offensive excitement in the game, arguing about the halftime show and which were the best commercials, or bemoaning  the fact that they had to watch the Patriots, Bill Belichick and Tom Brady when another Lombardi trophy.   Not enough took a pause to think about how great it is to be a fan in 2019, when the game is so much better than it used to be.  It is important to recognize that in many ways football is better than it has ever been.   Why do I say this? Because more people are allowed to be part of the game than at any other time in history.  In the middle of the 20th century, at both the professional  and collegiate level, it was for white men only.  Thousands of great athletes were cheated out of the opportunity to play, the rest of us were cheated out of the joy we could have gained in watching them.

Let me tell you a story that was once the standard in a not so distant past:
The University of Buffalo has had a football team for over 100 years.  They have only played in three bowl games, and never won one.

In 1958, the team went 8-1 and was invited to the Tangerine Bowl in Orlando, Florida. They were lead by tailback Willie Evans, who died two years ago this week. The team was beyond ecstatic to be the first team to ever to have the opportunity to represent the University in a bowl game.

However, the Tangerine Bowl informed the school that two black players on the team, Evans and defensive end Mike Wilson, would not be allowed to play in the game because of the color of their skin.

The team held a meeting, and unanimously voted to not accept to the invite to the game. Quarterback Joe Oliviero said, “They insulted two of our teammates, and we were going to hit them back between the ears by refusing to go without our teammates.”  The team stayed home, lost the opportunity to play in a bowl game, but the rest of us won because of their courage in making a stand.

The University of Buffalo would not be invited to another bowl game for 50 years.
There are tons of stories just like that where athletics were stained by the deep divisions of bigotry that our country has had to fight through.  Heroes like the 1958 Buffalo Bulls who challenged this country to be better too often get tossed to the scrap heap of history. Their stories need to be told. 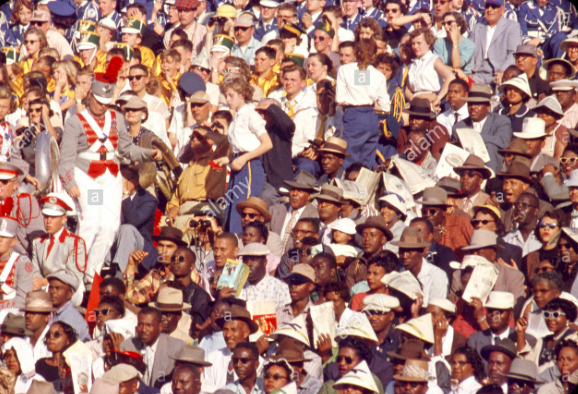 There are tons of tales just like that where athletics were stained by the deep divisions of bigotry that our country has had to fight through. In 1946 when Kenny Washington became the first African American player in the N.F.L., there wasn’t so much as a black waterboy.  In today’s football we not only have players of every ethnicity, we have coaches, broadcasters, and officials.   We have had an openly gay player in the N.F.L., as well as women officials, coaches, and broadcasters.  The game, like our country is a lot better when more people are allowed to be a part of it

Do we still have a ways to go?  There is no question.  However, it is okay to pause for a second and celebrate how far we have come, and it is even more important to honor heroes like the 1958 Buffalo Bulls who did the brave, right, and difficult things to make the game and this country better.  60 years later, things have drastically improved, but not without those who did the dirty work first.  The 1958 University of Buffalo Bulls did not win a National Championship, a Bowl Game, or even appear in one.  All they did was taking a step to make the game better for you and me.