Ricky Ray would have been 42 years old today.  Three decades after he and his family were treated unimaginably poorly, not many know their story, but they deserve to be remembered.   The ignorance, intolerance, and shameful cruelty these people were subjected to is a lesson that should be studied to be never repeated. 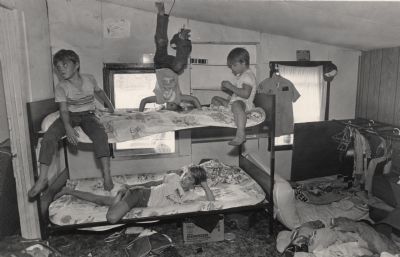 The Ray brothers: Ricky, Robert, and Randy were hemophiliacs from birth who contracted the H.I.V. virus from blood transfusions in 1985, when they were all under 8 years old.  Their community of Arcadia, Florida reacted with fear and outrage when their situation was learned.  The DeSoto school board made the decision to ban the boys from attending elementary school.  They were also asked by ministers at their church to stay away, who told parents Clifford and Louise that there would be a panic if they brought their children back to Central Baptist Church, which Louise had attended since childhood.

The Ray family sued the school district and won re-admittance to school, as well as a $1.1 million settlement.  In August of 1987, when the boys returned to Memorial Elementary School, it was half empty because other parents pulled their children from the school.  A girl told Ricky to move away from her because she could catch it by standing near her.  Two boys ganged up on Ricky at recess, one punching from the back and one from the front.  There were multiple death threats made via phone calls to the family’s house as well.

On August 28, 1987 and arson burned down the home of the Rays.  The family had relocated for safety, and only Clifford’s brother was staying there.  He survived, but was hospitalized for smoke inhalation.  At a news conference with the parents, someone shouted out, “Next time you won’t be so lucky.”  As a cousin was trying to salvage whatever she could from the charred ruins a driver by shouted, “Get out of our town Rays….you are not welcome here.”

The family moved to Sarasota, Florida where the school district instituted a program to educate students, families, and the community about H.I.V. and A.I.D.S.  It was thoroughly explained to them that the boys were no threat to the safety of others.  There were a few protests, but for the most part the boys were welcomed by the other students.

Ricky drew national attention in 1991, when at age 14 he proposed to his girlfriend, 16 year old Winonah Lindberg. He bought her a diamond engagement ring, and both sets of parents approved. Ricky said he knew he was going to die soon, and he wanted Winonah to get his share of the settlement when he passed.  The two hit the talk show circuit for a few months, but then a judge ruled that the two could not be married because of their age.

Ricky’s health worsened in late 1992. He was hospitalized multiple times for infections and pneumonia, but allowed cameras and news crews into the hospital so that people could see the real face of A.I.D.S.  He said “This is what A.I.D.S. is, this is what it does to you.” He received a phone call of support from President-elect Bill Clinton, who thanked Ricky for his courage and for helping to raise awareness for people suffering from H.I.V. and A.I.D.S.

Ricky Ray died December 14, 1992 at the age of 15.  His brother Robert died in the year 2000 at the age of 22.  Soon after, Clifford attempted suicide but failed.  Randy Ray is still alive in Orlando, Florida, managing his illness through advanced medication.

It is painful to learn the story of Ricky and his brothers.  It is hard to believe that people could have been so cruel, but we must also recognize that cruelty was due largely to ignorance.  Ignorance is fuel for hatred, knowledge is fuel for compassion.  The more we learn, the better we are.  The Rays deserved so much better.