Happy birthday to Muhammad Ali, who would have turned 77 today.  His story and relationship with America are complex and worth pondering.

In 1967, Muhammad Ali  was still known as Cassius Clay, and he refused to enter into the United States Military. He went to his scheduled induction in Houston, but when his name was called repeatedly, he refused to step forward.

He became a felon. He was kicked out of boxing and stripped of his title belt. He was sentenced to five years in prison. 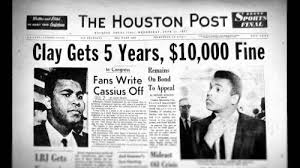 To many, he became America’s biggest villain. To others, he became a hero.
David Susskind, host of a popular national television show at the time said:

“I find nothing amusing or interesting or tolerable about this man. He’s a disgrace to his country, his race, and what he laughingly describes as his profession. He is a convicted felon in the United States. He has been found guilty. He is out on bail. He will inevitably go to prison, as well he should. He is a simplistic fool and a pawn.”

One might take a look at Ali’s side of the story as well.

He won the Olympic heavyweight boxing gold medal in Rome in 1960. Three days later he was in his hometown of Louisville Kentucky. He went into a restaurant proudly wearing his gold medal around his neck. He was stopped at the door by the manager who said, “We don’t serve Negroes here.”
When Ali refused his to go in the U.S. army he said:
“My conscience won’t let me go shoot my brother, or some darker people, or some poor hungry people in the mud for big powerful America. And shoot them for what? They never called me nigger, they never lynched me, they didn’t put no dogs on me, they didn’t rob me of my nationality, rape and kill my mother and father. … Shoot them for what? How can I shoot them poor people? Just take me to jail.”
Ali’s conviction was overturned by the United States Supreme Court in 1971. When he passed away, he was remembered by many as one of the greatest athletes in American History. Many spoke fondly of him standing up for what he believed in, while others still criticized him for it.
You can take whichever side you want. Personally, I’ll just remain glad that I never was in a position to have to make a decision like this. I’ll continue to hope that those in the future are not put in positions like this either.
Learning history is important. Especially learning both sides of the story, including the uncomfortable parts.

Just today, the city of Louisville renamed their airport the Muhammad Ali Airport, even though he was afraid of flying.