100 years ago today, the North End of Boston was bursting with life and vitality like so many other American cities of the time.  Factories busting, immigrants hustling, and everyone was thankful and happy that World War One, the deadliest war in human history had ended.  All of that changed in an instant……one that could have easily been prevented.

January 15 is the day that will forever be known in Boston for the “Great Molasses Flood”, which killed 21 people and injured another 150.

Near the waterfront at the end of Commercial Streets, a company known as United States Industrial Alcohol owned a 50 foot hight tank that was filled with Molasses.  The tank was 90 feet across, and held 2.5 million gallons.  The molasses was delivered by ships arriving from the Caribbean, and would soon be turned into rum and distributed all over the world in the final months before Prohibition took hold.    The tank had been built in 1915 in a rushed and careless fashion.  Also important to note is the absence of any meaningful regulation or oversight over companies like USIA at the time.  There had been several complaints of leaking molasses over the previous months, but other than some painting and re-caulking, the company did little to fix the problem.  It was common knowledge that the tank leaked, as children would often be sent to fetch pails of molasses for their families.

January 15, 1919 was unseasonably warm in the northeast.  People were out and about, enjoying sunshine and temperatures in the mid 40’s.  A few minutes past noon, something went terribly wrong.  Sounds that witnesses later reported as “sounding like gunshots” came from the area of the molasses tank.  The sides of the tank exploded open, and suddenly 25 million pounds of molasses were crashing down Commercial street at speeds of up to 35 miles per hour.  Some reported seeing a wave as tall as 40-50 feet high.  Boston policeman Frank McManus shouted to the dispatcher, “Send all available rescue vehicles and personnel immediately — there’s a wave of molasses coming down Commercial Street!” 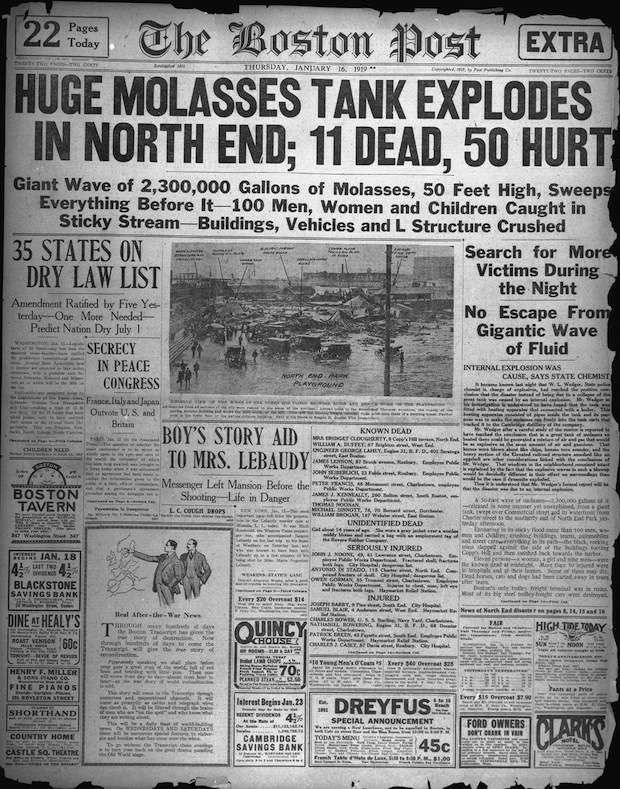 A firehouse was knocked off of its foundation, a train was thrown off the tracks, electric poles were toppled, animals were trapped and killed.  The 21 humans who lost their lives that day were largely Italian and Irish immigrants, who included two ten year olds who were gathering firewood for their family.  About half of all of the deaths were caused because people simply got stuck.  A firefighter survived the initial blast for two hours, but ultimately drowned.   When the molasses finally settled, it formed a pool 2-3 feet deep all over the North End.  In today’s money, the event caused over $100 million in damages. It took four days to find all the victims, and another two weeks to clean up the mess.

Legend has it that in the summertime, you could still smell the molasses in the North End for many decades later.  Few people, even in Boston know much about the event as there is only one small plaque in the area commemorating it: 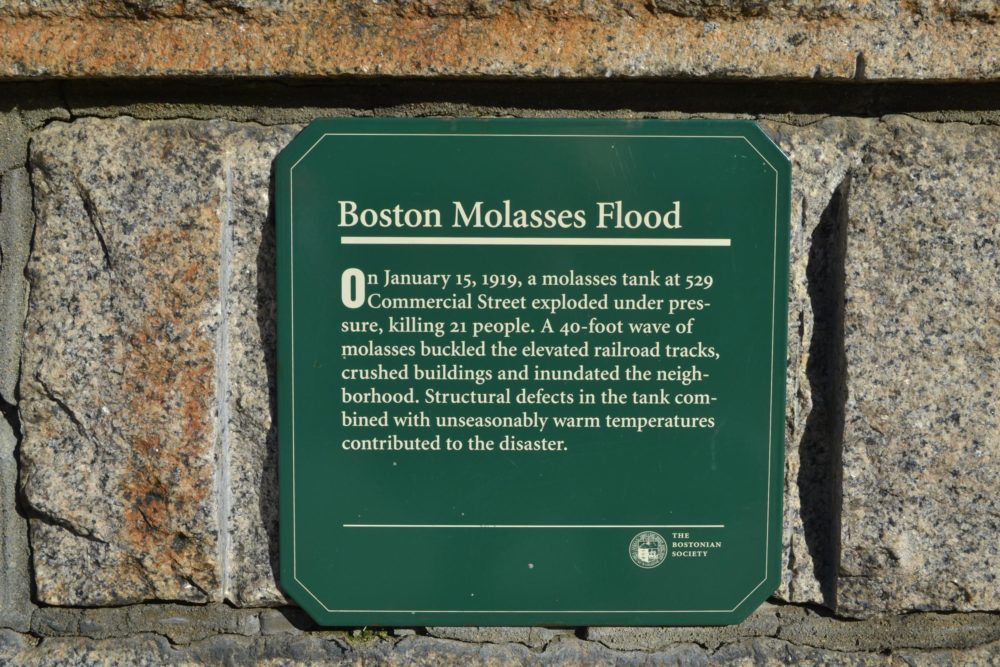 I’m lucky enough to be friends with a popular Boston Duck Boat Captain, Michael Shine. I messaged him to ask about the Molasses flood of 1919, here is what he had to report:

“I was told that the caretaker of the Tank would stay up at night thinking about its poor design, as the tank would creak and leak and moan. . They say the tank was painted brown to cover the leaks. When it popped, either due to the unusually warm weather that caused the molasses to expand or because it fermented and the C02 levels may have stressed it terribly..  A brick firehouse was pushed into the Harbor. Lots of Horses died. You couldnt swim out of it because of the viscosity. One story I like to tell is about a train engineer. He was operating a trolley on the elevated track that went above Commercial Street next to the tank. He saw that the supporting columns had been damaged by the molasses from afar and the buckled track. He had to run to the back of the trolley and engage the rear engine to help stop it as it careened towards disaster and managed to save everyone. I have also heard that the molasses got tracked across the city, that doorknobs in Southie were sticky from those who managed to make it out after being effected, or trying to help. Then of course, it froze again, making it incredibly difficult to clean it all.” 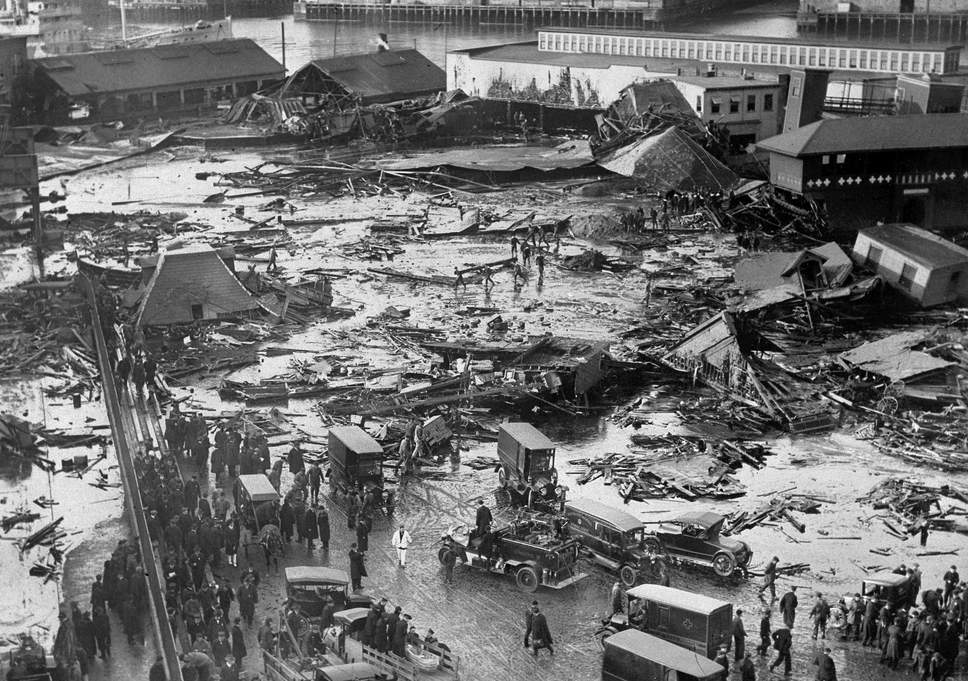 125 lawsuits were filed against U.S.I.A., who tried to claim that the cause of the accident, in the heart of the first red scare, was sabotage by Communists.  It took six years, the testimony of 3000 witnesses and nearly 45,000 pages of testimony before the cases were all finished.  In the end, the courts ruled that U.S.I.A. was responsible for the explosion and the damages caused by it.  In 2019 dollars, they were forced to pay over ten million dollars in settlements to the victims and their families.  Thankfully, there were many laws and regulations passed in the coming years in Boston and nationwide to prevent another disaster of this magnitude.