On this date in 1972, President Richard Nixon announced plans for the development of the Space Shuttle program.  After many years of frustration and embarrassment in the 1950s and 60s, the United States was finally winning the space race.  The Mercury and Gemini programs had taken Americans into space to orbit the earth, and then the Apollo program took humans to the moon seven times.   At a time when it didn’t feel great about much else, America was immensely proud and invigorated by its space program.  However, the space race was costing America a tremendous amount of money.  N.A.S.A. wanted the ability to re-use a rocket ship and the capability to build and visit a space station.  From his home in San Clemente California, also known as the “Western White House”, President Nixon issued this statement 47 years ago today:

“I have decided today that the United States should proceed at once with the development of an entirely new type of space transportation system designed to help transform the space frontier of the 1970’s into familiar territory, easily accessible for human endeavor in the 1980’s and ’90’s.

This system will center on a space vehicle that can shuttle repeatedly from Earth to orbit and back. It will revolutionize transportation into near space, by routinizing it. It will take the astronomical costs out of astronautics. In short, it will go a long way toward delivering the rich benefits of practical space utilization and the valuable spinoffs from space efforts into the daily lives of Americans and all people.”

The goal would be to launch more people into space, more often, so humanity could learn how to live and work outside the constraints of the earth and gravity.  The first reusable spacecraft would allow us to conduct research and experiments that could not be foreseen at the time the program was conceived.  They would continue the spirit of exploration that had been a the very core of human fabric since the days of the cavemen…….to investigate and conquer the unknown. 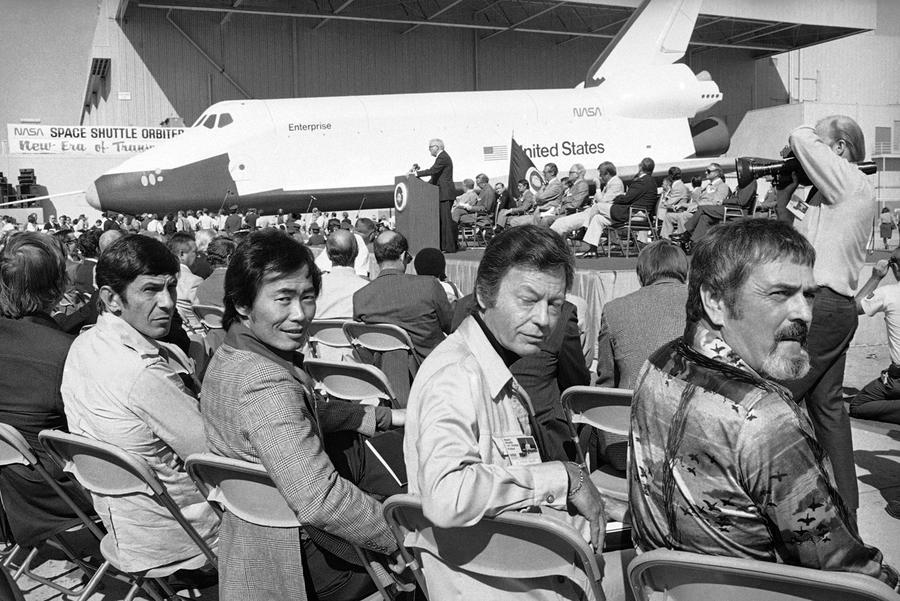 The first flight of the space shuttle was made on April 12, 1981.  This was also the twentieth anniversary of the first ever manned flight into space by the Soviet Union, April 12, 1961, when cosmonaut Yuri Gagarin orbited the earth.  (This was only a coincidence, as the Space Shuttle was delayed for two days because of weather problems.)  The first shuttle used was named the Columbia and was commanded by Astronaut John Young, a veteran of four previous spaceflights including a walk on the moon in 1972.  The flight was piloted by Navy test pilot Bob Crippen, who would go on to pilot three more space shuttle  missions.

Over the next three decades, America would use five shuttles for 135 missions into space.   Everyone old enough vividly remembers the two terrible tragedies: The Challenger in 1986 and the Columbia in 2003, but they also remember the triumphs of the shuttle program as well.  Today, many debate whether the $209 billion spent on the program was worth it.  The program cost much more than was originally figured, and it did not fly nearly the number of missions that it had originally intend to.

The Space Shuttle program did however provide valuable steps forward in terms of research and science.  It helped build and facilitate the international space station establishing the first ever foothold beyond our own planet.  The space station has proven valuable to research in biology, medicine, physics and other fields of science.   Several times it flew missions to repair the Hubble telescope, allowing scientists to view the universe in ways they never had before.  Even the failures and shortcomings of the program have paved the way for learning and the development of future programs.

When history judges the Space Shuttle program, I hope it will remember to consider the unmeasurable benefits it provided.  It captured our collective imagination, it made science cool and important to young people, it challenged us to think about the possibilities that lay beyond our own world.  It gave Americans a reason to unite in success and tragedy.  When two people are captivated by looking towards the heavens  and mankind pursuit of understanding them, they tend to stop worrying who the other one voted for.  The answer to whether or not the Space Shuttle program was a success or failure probably lies somewhere in the middle, but it sure was interesting to watch.