33 years ago tonight, Rick Nelson died in a plane crash.

He was  one of the biggest stars of the 1950’s and 60’s.  By the time he was eight years old, nearly everyone in America knew him as the son of “Ozzie and Harriet” on the popular show of the same name.  The show was one of the longest sitcoms in history, airing from 1952 to 1966.  “Ozzie and Harriet” often ended with young Ricky playing a song on his guitar.

His fame would far outlast the show.  He began churning out hit singles in 1957 at the tender age of sixteen.  He had thirty top 40 hits in the next five years.  He also had nineteen top ten hits.  At one point, the Ricky Nelson fan club had over 9000 chapters.  He also appeared in many popular films of the day.  As the 60s wore on, he had less commercial success, but continued to be highly respected by other musicians and critics. In fact, he was respected enough by serious music people, he would be voted into the Rock and Roll Hall of Fame. As he tried to shed his childhood image, including dropping the “y” from Ricky, he lost some fans but continued to produce quality music.

In October 1971, still trying to get others to allow him to outgrow his childhood image and become his own man, he appeared at a star studded concert at Madison Square Garden in longer hair, wearing  the more hippy clothes of the day.  He played new songs.  Fans who wanted Rick to simply be the Ricky of their childhood booed loudly.

This led him to write one of his best songs, “Garden Party” about the experience.  The song became Nelson’s last top forty hit.  It includes pretty simple, but important words to live by:

“Well its alright now, I learned my lesson well. You see, you can’t please everyone so you got to please yourself.”

On December 31, 1985, he was on his way to play a New Year’s Eve show in Dallas.  HIs plane caught fire and crashed.  it was widely reported that the crash was caused by fire started by people freebasing cocaine. Years later, a report determined it was a fire caused by a heater, and had nothing to do with drugs. Unfortunately, that correction to the story received a lot less publicity, and many people still think that Nelson’s death was drug related.  It is probably only fitting for a man who never got the credit he deserved to be disrespected even in death. 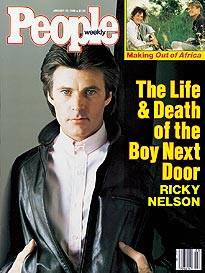