Harland, “Colonel” Sanders was born on September 9, 1890 .  He not only left the legacy of one of the most successful restaurant chains in the world, but a story of resilience and determination that we could all use to hear.

When he was only six years old, his father died of hay fever, forcing his mother to go to work skinning tomatoes at a canning factory.  Harland had to take care of his little brother and sister, as his mom would sometimes be gone for several days.  By necessity, he learned how to cook.

When Harland was 12, his mom remarried a man who was less than thrilled about having three step children.  Harland left the house to go work for room and board on a farm.  He also soon quit school.  He would explain years later, “Algebra’s what drove me off.”   He took a job painting streetcars at age 13.  At 14 he moved to southern Indiana to work on another farm.  The next year he moved again to New Albany, Indiana to be a streetcar conductor.  In 1906, he falsified his birth certificate so he could join the army.  He served in Cuba, and was honorably discharged in 1907.

Upon leaving the army, Sanders moved to Alabama to reunite with his brother, who had also left home to escape their stepfather.  He spent the next few years working a variety of railroad jobs.  One of which he lost for getting in a fight  with a co-worker.  He also met Josephine King, who he would marry and had three children with.  Sanders continued working for the railroad companies, taking his family with him  to jobs in Tennessee, Arkansas, and Virginia.  While in Tennessee, he worked at the railroad during the day, and studied law at night.  He became a lawyer in Little Rock, Arkansas, but that ended quickly when he got in a courtroom brawl with his own client.

He returned to Indiana to sell insurance, but was fired for insubordination. He then moved to Kentucky to do the same for Mutual Life insurance.   While in Kentucky, he bought a boat and operated a steamboat ferry between Jeffersonville, Indiana, and Louisville, Kentucky.  He then worked as the secretary of the Columbus, Indiana, Chamber of Commerce, and then manufactured acetylene lighting systems for farmers, in Columbus.  When none of these worked out, he became a tire salesmen in Kentucky for for Michelin.

He then became the manager of a service station in Corbin, Kentucky.  It was there that he first entered into the business of food.

Sanders would cook in the backroom of the service station to feed the hungry and weary travelers.  Remember, this is the 1930’s when there was no such thing as fast food yet.  His plates were plain, but delicious: pan-fried chicken, country ham, stringbeans, okra, hot biscuits, etc.  Word soon spread throughout the region that the thing to do when traveling in Kentucky was to stop at Sanders’ restaurant.  While running the service station, he got into a dispute with a neighboring gas station owner about one of his billboard signs.  The competitor, Matt Stewart shot a gun at Sanders, but missed him and killed another employee.  Stewart was sent to prison for life, eliminating the local competition.  The food was getting so popular, Sanders shut down the gas station and opened up a 142 seat restaurant.  He began experimenting then with what would become the eleven secret herbs and spices of Kentucky Fried Chicken.  He started using a pressure cooker to cut down the amount of time his customers had to wait, and his restaurant thrived for a decade.  It was during this time that he first franchised the phrase, “Kentucky Fried Chicken” to a restaurant owner in South Salt Lake City, Utah.  That restaurant is now considered to be the first of the chain. 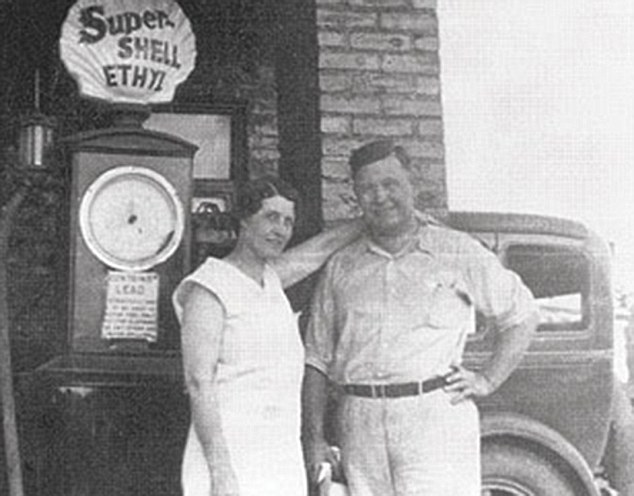 Photo Credit: Daily Mail
He caught yet another bad break in 1956, when it was announced that a new interstate highway would be built, seven miles from his restaurant.  This would divert most of the traffic away, and crush sales.  Sanders had to sell his restaurant for a considerable loss.  He began living  off of his savings, and was now old enough to get social security checks.

He wasn’t quitting though.

Colonel Sanders decided to hit the road with his pressure cooker in the back seat. He would drive until  he spotted a restaurant that might like his chicken.  He would go in and try to talk the manager into letting him cook for his employees. If the employees liked the chicken, he would stick around for a few days to cook for the customers.  He would then negotiate with the owner on selling his chicken in the restaurant.  They would often be willing to make a deal that Sanders would get four cents from every chicken cooked using Sanders’ process.  For years, he would zig zag the country repeating this process.  Even though this was when he was in his late sixties and early seventies, he would often put in several hundred miles in a day, then sleep in the back of his car.  His efforts paid off, as by 1963 he had 600 restaurants in the United States and Canada selling his chicken.

Now Sanders was in his 70’s, and worried that the operation had grown too big for him to properly manage.  There had been several times when he was approached by people wanting to buy the franchise from him, which he had declined.  Being set financially for life, he was now in a different frame of mind.   In 1964, Sanders decided to sell the business for $2 million and a lifetime salary of $75,000 per month.  He continued to have a relationship with Kentucky Fried Chicken, appearing as a spokesman and often making surprise visits into stores to see if they were living up to his standards. 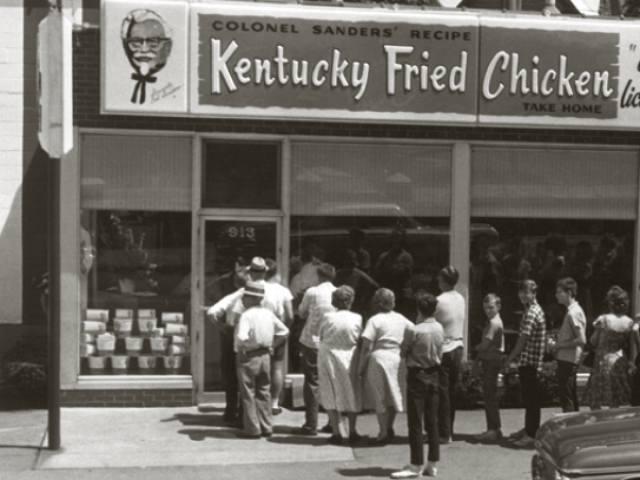 Thomas Edison once famously said, “Many of life’s failures are people who did not realize how close they were to success when they gave up.”  Colonel Harland Sanders was a man who refused to give up despite failure after failure after failure. His story is an inspiration for all to remember the two most important words someone who is struggling can heed: “keep going.”

Feel free to pass the story of Colonel Sanders to a friend who could use hearing it.  Remember, for every person that found there way out of darkness there was likely someone else who helped keep their lantern lit.