53 years ago tonight, “A Charlie Brown Christmas” aired for the first time.  It was viewed by 15 million people.  Nearly half of all American television sets tuned in that night.

If you are unfamiliar, Charlie Brown is the leading character of the comic strip “Peanuts”, which is one of the most influential and powerful works of any art form in history. It appeared in 2600 newspaper in 75 countries. It was read daily by 300 million people. Social scholar Robert Thompson called it, “The longest story told by a single artist in human history.”  Creator Charles Schulz understood the social power of his art and took the responsibility seriously.

“Peanuts” also would air 45 film and television specials, including “A Charlie Brown Christmas.”  Schulz was upset that Christmas had become too commercialized, too hectic, too material, and not enough about the actual birth of Jesus Christ; the long haired, brown skinned refugee who carried forth a message of love, peace, compassion, and acceptance of people of all kinds.

In “A Charlie Brown Christmas”, Schulz insisted on a scene where the character Linus reads directly from the Gospel of Luke about the true meaning of Christmas.  Executive producer Lee Mendelson vehemently protested.  At that time, according to the Los Angeles Times, only nine percent of all Christmas specials included any reference to the bible.  This was unsafe territory.   Schulz made a stand, and said he would walk away if the scene was not included.  He won.

“We cannot do this show without including the famous passage from Saint Luke. And that had never been done before either. No one would put biblical passages in an animated show, and we did it. … That was the highlight of the show.”

It was not the first, or last time that Charles Schulz would stand up for the Christian principles  he believed in, making sure he used his platform to promote those values.

He introduced a young African American named Franklin in 1968. He said he wanted to normalize the idea that children could be good friends with members of a different race. (By the way- Franklin’s dad was in Vietnam.)  It is also important to understand the timing of Franklin appearing in the strip. It was April 1968, just weeks after the assassination of Martin Luther King.  Schulz responded to a fan who wrote him, pleading to put an African American child in the strip so kids would be more exposed to the idea of inter-racial friendship. 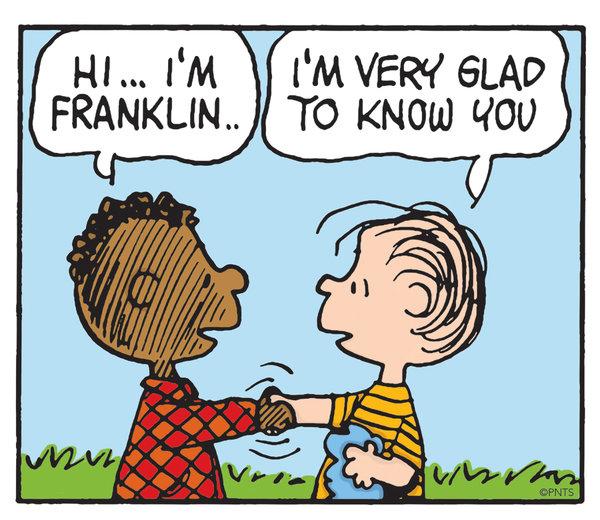 -Charlie Brown had three girls on his baseball team in a time when females were still far from being welcomed into the athletic community. In a special “Charlie Brown’s All Stars”, a hardware store offered to sponsor the team, but stipulated that no girls be allowed to play.  Charlie Brown refused the offer.  He took a stand for girls in athletics at a time when it wasn’t easy or popular.

Charles Schulz died of a heart attack on February 12, 2000.  The last original “Peanuts” would be published the next day.

Charles Schulz stared down the tradition held by American art to focus only on certain groups.  He challenged this at a time where this may have been perilous to his future.  He didn’t care.  I have little doubt that if Charles Schulz were alive and “Peanuts” continued to this day, he would use his power and influence to promote values of love, tolerance,  and inclusion into his work.  He would have featured kids from non-Christian religions as animosity towards them have resurfaced.  He would have had kids with disabilities, kids from the LGBTQ community, and other marginalized groups.