Four years ago today, this photo of a young Portland, Oregon man hugging a Portland police officer was going viral around the country.  Angry protestors in Portland were enraged over the decision in Ferguson, Missouri to not indict officer Darren Wilson for his involvement in the death of Michael Brown.  Similar protests were going on in nearly every big city in America.  Emotions were raw, nerves were frayed.

12 year old Devonte Hart was at the Portland protest simply holding up a sign that said “free hugs.” Portland Sgt. Bret Barnum approached Devonte and began talking to him about the common things they shared, like summer vacation. Soon the two hugged.  The moment  was captured by 20 year old photographer Johnny Nguyen.

It was first published in the Oregonian, and then shared over 200,000 times. It became known as the “hug shared around the world.”

For many, the picture  represented an island of peace in the middle of stormy sea of violence and rage.  It looked like a young boy who just wanted people to get along with each other and stop the yelling, hatred, and anger. The picture gave us hope.  The picture reminded us of what we should all be striving to be.  For a few moments, the story of the hug became bigger than the story of the protest.  CNN said it was “The picture America needed to see.” 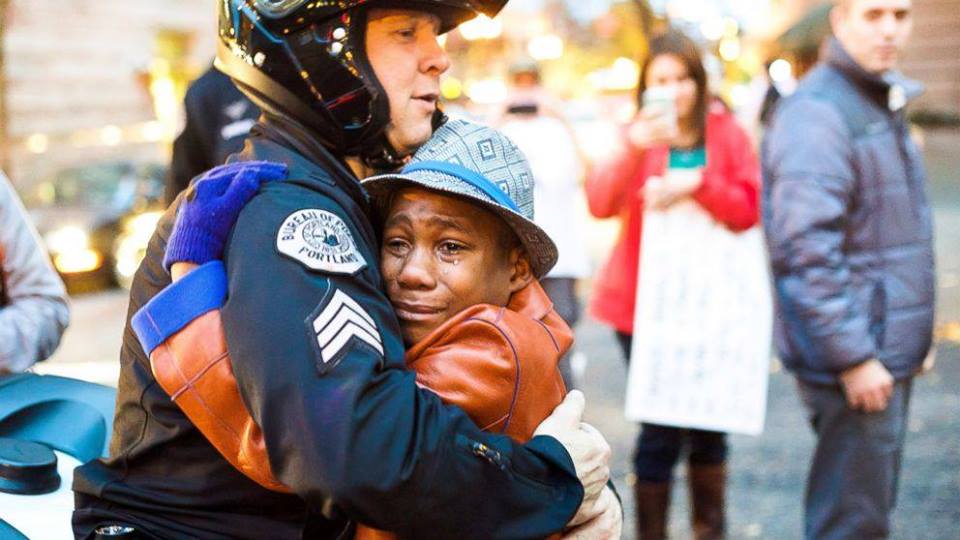 Sadly we now know so much more about that picture, and it is all bad.

Devontae Hart has not been seen in 8 months, and is in almost all certainty deceased. In March,  his adoptive parents drove off a cliff in Northern California.  The bodies of the parents, and three of Devontae’s  siblings were recovered.  Investigators feel it is very likely that both Devonte and his are also dead, but they have not been able to retrieve the bodies.  It is also very likely that the crash  was intentional, as there were no skid marks or other signs of breaking where the vehicle left the road.

In the days and weeks that followed the Hart family crash, we learned about the tragedy that was Devontae’s entire life.  The Hart children were victims of chronic physical and emotional abuse, as well as neglect.  They were severely underfed, as Doctor’s reported that each of the children extremely below average height and weight for their age.  Neighbor’s reported that Devontae used to go door to door to ask for food for he and his brothers and sisters.  After the accident, police learned that the Harts had only one twin bed for the six children.

Parents Jennifer and Sarah Hart were had only adopted the kids to make money off of them.  It is likely that when they could not keep up their financial woes, they decided to end their lives and the young lives of their children.  The story of the Hart children exposed with glaring light the many problems that happen on a regular basis in the American foster care system. There are far too many cases just like this one.

The picture of Devontae Hart hugging Bret Barnum was worth a thousand words when we first saw it. Words like love, hope, and peace.  It became filled with another thousand much different words last spring.

Bruce Springsteen once sang about “Searching for the ghost of Tom Joad” about Tom from “The Grapes of Wrath” essentially saying we all needed to find in ourselves and each other the strength to fight for justice like the character Tom Joad.

Hopefully none of us will ever know the true angst and pain that filled Devontae Hart’s life, but we can know that he was still trying to find a way to bring peace to others.

We should probably all keep searching for the ghost of Devonte Hart, and add more of his spirt into our own.