In addition to today being Thanksgiving, it is also the 55th anniversary of the murder of President John F. Kennedy.    These two occasions are quite different, as one causes to rejoice with appreciation while the other causes us to mourn about all that was robbed from us.  By thinking about them together, we might gain a better understanding of both.

As a high school teacher, I believe my job is not just to teach facts, but perspective.  A few years ago, I made the statement in class, “I would never trade lives with President Kennedy.”  The students were baffled.  They erupted with a cacophony of disagreement, puzzled how a high school history teacher in a small town could possibly say, much less believe such a thing.  I tried to explain it to them, as I will to you now.

If you have had a good father and mother who have been loyal to each other as well as you and your siblings be thankful.  John F. Kennedy’s father, Joseph P. Kennedy was an often dishonest businessman, as well as a serial womanizer.  He set a terrible example for his children on what a man should strive to be.  He had multiple extramarital affairs.  At least two of them were lengthy and with prominent actresses of his day, and wasn’t even very secret about it. I do not believe that either one of my parents ever would have disrespected the other, or our family in this manner.  Be grateful if you can say the same.
Joe Kennedy Sr. was often absent for extended periods of time from his children, preferring the company of other elites in Palm Springs and elsewhere.   My dad was not perfect, but he was present and always trying.  My parents sacrificed many of their personal ambitions so they could help their children and grandchildren succeed.  They still do.

JFK’s sister Rosemary suffered from mental and emotional problems.  Kennedy’s parents decided to have his her lobotomized, which failed miserably.  After the procedure, she had the mental capacity of a two year old and was institutionalized for the remainder of her life.   Her mother, Rose Kennedy didn’t visit her daughter for 20 years.  Her father never did.  When their daughter Kathleen married a member of the Church of England her mother vehemently disapproved of the marriage to a non-catholic, Kathleen was virtually disowned by the Kennedy parents.  Neither attended her wedding.  My parents would never have done this.  If you can say the same, be thankful today and every day.

If you never had to fight in a war, be thankful.  My late teens and  twenties were filled with fun, friendship, and adventure.  I was able to go to college, play baseball, and enjoy these times while living care free.  I hope these times in your life were equally blissful.  I hope you didn’t have to sacrifice your youth and innocence to go to lands far from home to kill, have others trying to kill you, while witnessing injury and death on a regular basis.  All far away from the ones you love and who love you.  After graduating from Harvard, the future President Kennedy was preparing to go to graduate school at Stanford when the Japanese attacked Pearl Harbor.  He would give up his young adulthood to defend his country.  There is little question that young Jack Kennedy was a hero for his incredibly brave actions, especially when his P.T. 109 was slammed into by a Japanese Destroyer.  I’m thankful that he was so brave and courageous, I’m even more thankful that I never had to be.  I hope you can say the same. 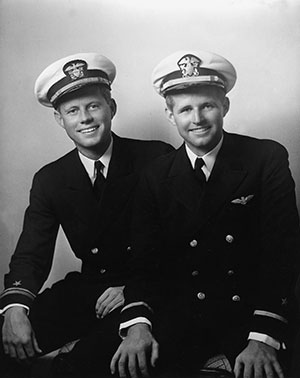 If you are healthy, and appear headed towards enjoying a long life, be thankful. JFK suffered from health problems for nearly his entire short life.  When he was young he had scarlet fever, jaundice, severe intestinal problems, and other ailments.   By the time he turned 17 he had spent a year of his life in hospitals, clinics, and infirmaries.  He also suffered from degenerative back problems, only made worse by his service in World War Two.  Additionally, he was plagued by Addison’s disease.  He was constantly on intense medication to alleviate his suffering, which many believe often did more harm than good.  Not to mention that his life ended when he was only 46 years old.  My health has not been perfect, but I wouldn’t trade it for President Kennedy’s.  I expect to live much longer than he was able to, I hope you can say they same.

If your siblings are healthy and appear to be headed towards a long life, be thankful.  JFK’s older brother Joseph Kennedy Jr. was killed in World War Two in a mission that is tough to comprehend.  The mission of he and another pilot was to fly a plane filled with explosives towards a Nazi target, then parachute out of the plane before it would be guided to the intended destination and detonated by remote control.  Sadly, they were not able to eject from the aircraft before it exploded.  They both were killed instantly, with neither of their bodies ever recovered.  Four years later,  Kennedy’s sister Kathleen  was killed in an airplane crash caused by turbulent weather in the skies over France. She was only 28.   I’ve been blessed with two older sisters who are also two of my best friends, mentors, and often inspirations.  They are both now in their fifties, going strong and for the most part healthy.  I hope you are also able to enjoy relationships with all of your brothers and sisters much longer than JFK was able to.

When we are young we are conditioned to strive for fame, power, wealth, etc., while we often fail to realize that what is most important is health and happiness for ourselves and the ones we love.  John F. Kennedy should be admired for many things, especially his strength and perseverance to overcome many challenges that I never had to.  Hopefully today and every day we all can realize that we have things that often the most famous, rich and powerful often yearn for.

One thought on “The J.F.K. Assassination and Thanksgiving: A Joint Lesson”