One year ago today, September 24, 2016 the National Museum of African American History and Culture was opened.  At it, a picture was taken that captured the hearts of America.  Squarely in the middle of a heated and contentious election campaign, it showed an African American First Lady and former caucasian President sharing a tender embrace.  They looked like two old friends comforted and happy to be sharing a special moment.  They were.  In addition to warming our hearts, it should also teach us.  Two people from different backgrounds, ethnicities, philosophies, and political parties can still be good friends.

The friendship began in December of 2008 when the Obama family, including young daughters Sasha and Malia travelled to Washington D.C. to take a tour of their new home, the White House. George W. Bush is the son of a man who was once Senator, Director of the C.I.A., Vice President, and President.   With two daughters of his own, he understood very well how the Obama girls might be feeling nervous and intimidated by moving into the hallowed house.  He knelt down to greet the girls, who were then seven and ten years old, reached out his hand, and asked them if they would like a tour.  He guided them around, introducing them to staff, and showing them the ins and outs of their new home.  Michelle Obama is many things, but she is first a mother.  When she saw her daughters being tenderly cared for, she instantly developed a soft spot for the former President.

In the years that followed, the First Lady and Former President would see each other at various events like funerals and dedications, talking to each other every time. Their unlikely friendship grew with every meeting.   They laughed at each other’s jokes, and now even send each other cute pictures of their pets.  When they hugged at the opening of the museum, it was far from the first time. 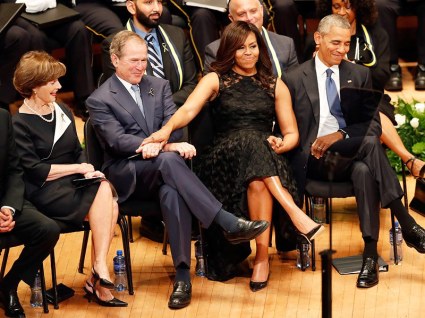 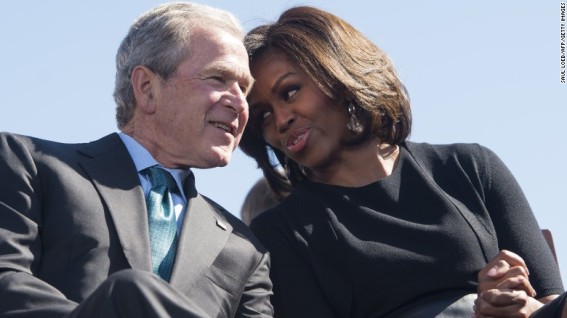 Americans are constantly thinking about a place they would rather be.  Sometimes that place is physical, but in this case it is spiritual.  As we fight and insult each other all too often over things like how we feel about football players taking a knee during the national anthem, and we yearn to go back to a place where we can just lose ourselves in the arms of a friend without caring about who they voted for.  We can get to that place by taking a road paved with respect and kindness, and a willingness to focus on the  things that unite us.

THE STORY GETS BETTER:
The version of the picture that went viral a year ago was too narrow, and didn’t tell the full story.  Another great part was cut out: the man on the left at the back of the stage, Congressman John Lewis.  He is the man who has done more than perhaps any other living American to make a moment where Michelle Obama and George W. Bush could embrace on the steps of the Museum of African American Culture and History possible. 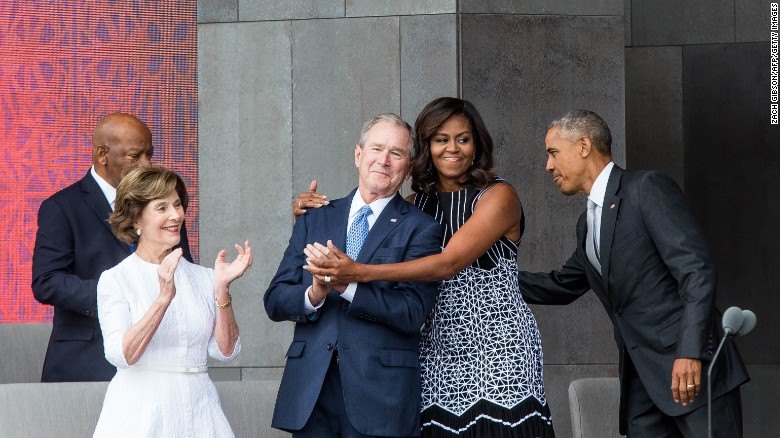 That is the John Lewis that was one of the original 13 participants of the “Freedom Rides”, during which he was dragged off of a bus in Alabama and beaten by a state trooper with a lead pipe. The John Lewis that got back on the bus two weeks later, and got beaten again.

That is the John Lewis that spoke from the Lincoln Memorial in August 1963, right before Dr. Martin Luther King Jr did.

The John Lewis that led marchers in search of voting rights over the Edmund Pettus bridge in Selma, Alabama in 1965. He led the march straight towards the police with billy clubs, promising to use them if he kept marching.   He did.  He was taken to the ground and beaten with one of those billy clubs. During the melee, his skull was fractured.

He came back and led the march over the bridge again a few days later.

John Lewis is now in serving his 30th year as a Congressman from Georgia.  A year ago he looked  on at the President and former First Lady and saw an all too rare and brief glimpse of the world he has spent his life trying to create. One where people focus on things like their common love for children, rather than their political party or the color of their skin.