When it comes to history, the tellers of the story have great power.  They choose what to talk about, and what to leave out.  They make choices with there allotment of time, instruction, and how to present the story.   There are decisions made every day by teachers, book publishers, network programming directors, movie makers, etc.  Some people and events get entire books, television series, and movies made about them, while others of similar importance often get brushed into relative obscurity.  I can’t explain why that is, just that it is.  A great example in America are the murders of four of our Presidents.  Everyone knows all about two of them.  If you asked an adult on the street to explain how Abraham Lincoln or John Kennedy died and they couldn’t do it, you’d look at them like they were idiots.  What about the other two?  Can you name the other Presidents that were murdered while in office?  Can you name their killers, or the story behind how and why they were killed?

It is okay, most people couldn’t.  It is not your fault either, it is how the story of America was told to you.

William McKinley and James Garfield are the other two Presidents to be murdered while in office.  President McKinley was killed by an anarchist named Leon Czolgosz in 1901.  Today is the anniversary of the death of President James Garfield, who died in 1881 from gunshot wounds suffered nearly three months earlier.  The story is worth knowing.  It is too bad so few people do.  In many ways it says a lot about how far we have advanced in some areas, and how we have not really advanced at all in others. 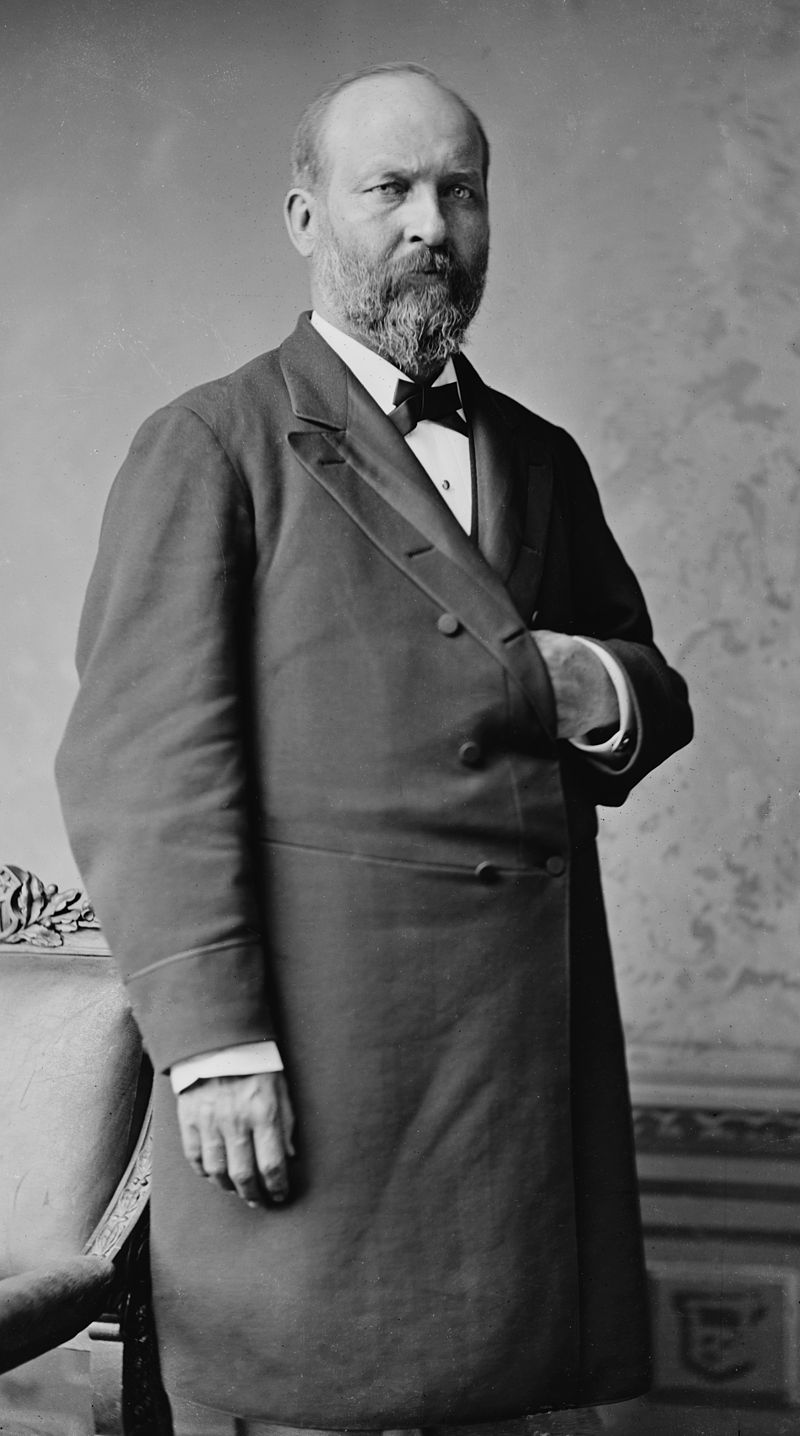 James Garfield was raised on a humble farm in Ohio, and would later represent the state of Ohio in the United States House of Representatives for nearly two decades.  He was a a Major General for the Union during the Civil War. In the election of 1880, one of the closest ever, he  defeated his Democratic Opponent Winfield Scott.  Scott was also a decorated civil war general.  Garfield was inaugurated in March, and shot before he would reach 100 days into his Presidency. 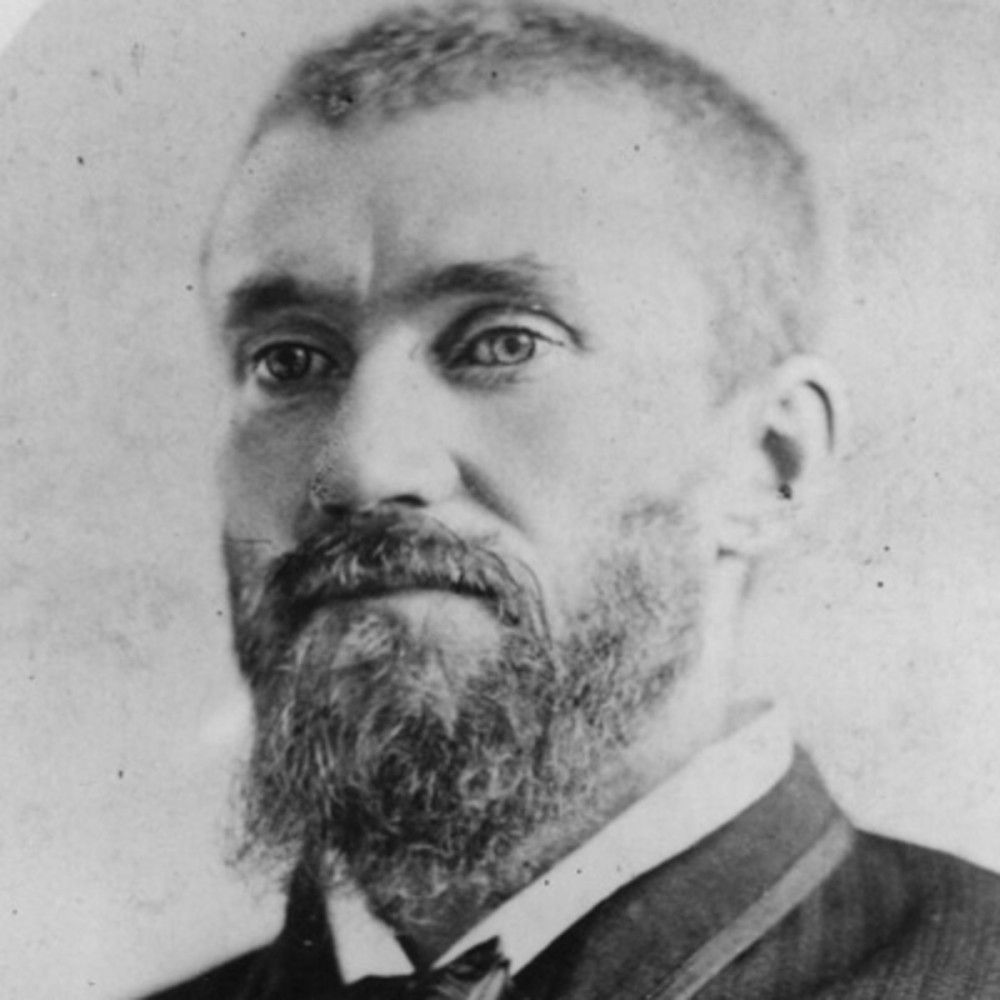 Charles Guiteau had a troubled childhood.  His mother suffered from psychosis and died when Charles was seven.  He was mostly raised by his older sister. Today, he would be diagnosed with A.D.H.D., as he couldn’t sit still or keep from fidgeting. His older brother used to offer him a dime reward if he could remain still, and very rarely had to pay. Guiteau used his $1000 inheritance to go to school at the University of Michigan, but dropped out after one year.  The next twenty years consisted of drifting from job to job, weaseling out of paying rent, and mental instability.

Guiteau was married for five years to a librarian.  He was horribly abusive to her.  He locked her in a closet, hit her, kicked her, and drug her around the house by her hair shouting “I am your master.”  His father would later say, “My son was fit only for the insane asylum.”  In 1880, he became interested in politics, and wrote a speech that was originally to be used by Ulysses S. Grant in his campaign for President.  When Garfield received the Republican nomination, Guiteau simply switched the name from Grant to Garfield.  Garfield gave the speech twice. Guiteau felt like he helped Garfield get elected, and was owed a debt.

Guiteau  wanted a position in the government.  He preferred to be appointed a diplomat.  He went to the Republican headquarters asking to be hired, but with no luck. He wrote letters to the secretary of state James Blaine, but was denied.  He wrote letters to Garfield himself, but got no response.  He visited Blaine in person, who warned him never to do it again. 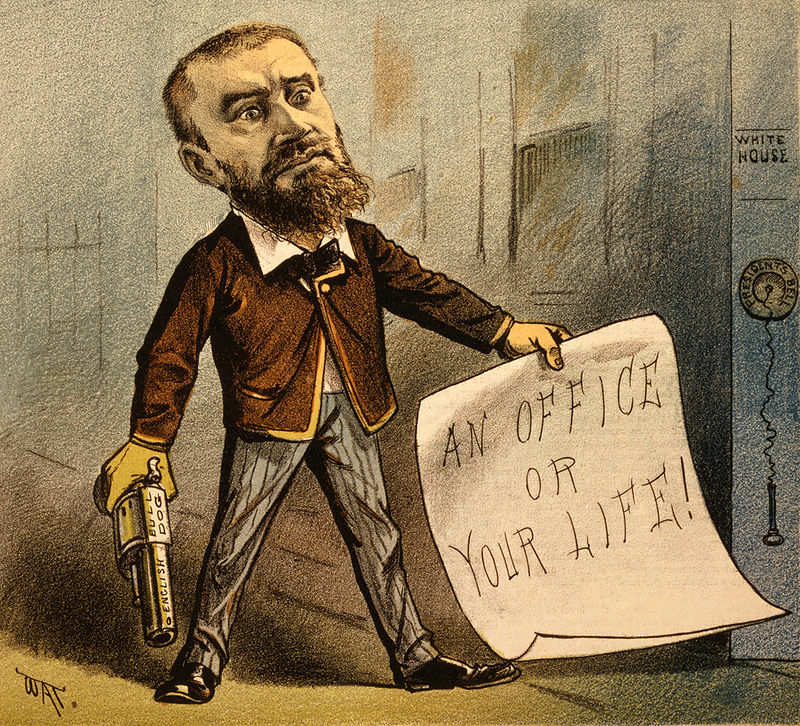 Guiteau decided that President Garfield was bad for the Republican party, and must be killed.  He began stalking the President, who travelled with no guard or secret service in spite of Lincoln’s assassination 16 years earlier.  He then borrowed $15 and bought a hand gun, with no screening or background check.  He chose the gun mostly upon its appearance.  He knew the gun that killed a President would one day be on display, and he wanted it to look good.  One sunday morning he spotted the President walking by himself through Lafayette park.  He followed him, ready to carry out his plan.  When he realized the President was on his way to church, he couldn’t do it.  Finally, at the Potomac and Baltimore train station near the Capitol, Guiteau approached Garfield and shot him twice, once in the abdomen.  He was apprehended at the site.

The President battles for his life:

The President would live for another 80 days, while Doctors did the best they could with their 1880s knowledge and equipment to save him.  The couldn’t find the bullet that was lodged in his abdomen.  At least 12 doctors tried.  Alexander Graham Bell came to the White House with a rudimentary metal detector, but had no success in finding the bullet.  The doctors who searched inside him for the bullet often did it with unsanitized hands and equipment.  The White House had no air conditioning, and there were often rampant flies in the room where stayed.  Since there was no air conditioning in the day, they did what they could to keep him cool.  They brought it stacks of ice blocks and put fans on top of them.  It actually helped, lowering the room temperature by twenty degrees. 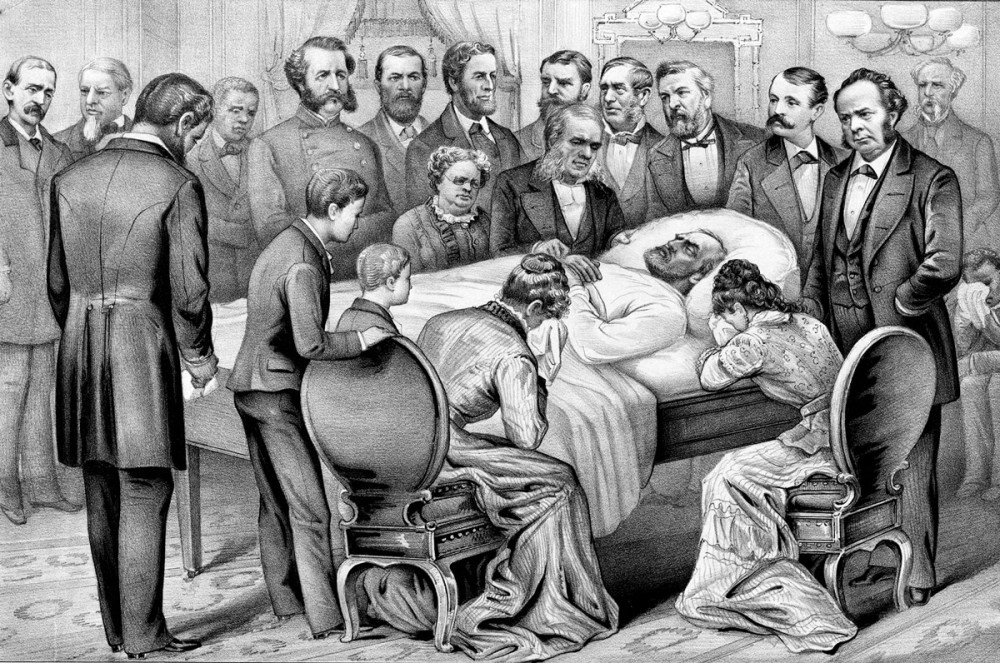 Photo Credit: The Library of Congress

Garfield was eventually moved from the White House to a cottage on the New Jersey shoreline.  Here, Doctors made another mistake.  They feared the bullet may have lodged in the intestines, so they began feeding him rectally.  He lost over 100 pounds.  Telegraphs and newspapers covered the drama daily.  The White House was besieged by letters of prayer and advice.  One letter suggested, “Just flip him upside down and shake the bullet out.”  Medical journals critiqued and criticized the care Garfield was being given.

President Garfield passed away on September 19, 1881.  He and John F. Kennedy are the only Presidents not to live to 50 years old.  Many believe that if his wounds were suffered today, he would only be hospitalized for a few days, and back to work in less than a month.   At trial, Charles Guiteau tried an insanity defense that was unsuccessful.  He also tried to say that he only shot the President, but it was the Doctors that killed him.   He was convicted and hanged five months later.  To this day, psychologists study and debate whether and what kind of mental illness Charles Guiteau suffered from.  His body was originally buried at a secret location on an army base.  When it was believed that men were going to try and steal the body to sell it, it was destroyed.  His brain however has been analyzed, and is now on display at a museum in Philadelphia. 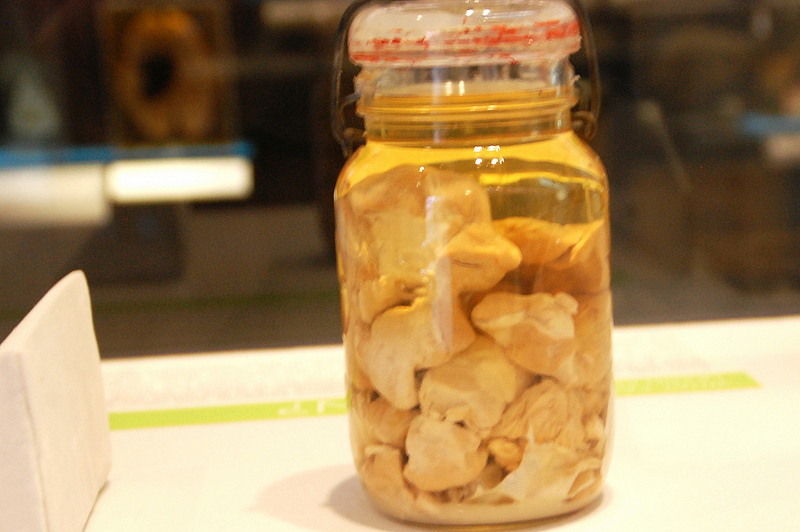 What we can learn:
There are an incredible number of valuable, interesting lessons out there that somehow get pushed to the side.  The storytellers need to do a better job of telling more stories.  From this one, it is interesting to ask ourselves how far we have come in terms of treating illness in the body and mind.  It seems we have come a long way in one, and not nearly far enough in the other.  Also, the more you learn about Charles Guiteau, the more you realize there is no way he should have been able to have access to a gun.  That wouldn’t happen today, right?