History has an interesting, often unspoken power.  It is the capacity to determine which stories to tell, and which to not.  Text book writers, history teachers, monument builders, film makers, etc. all have the tremendous responsibility to decide what we see, hear, and learn. For example, there are few Americans who don’t know who Jackie Robinson is.  His story is told to nearly every school child in this country, and others. He recently was the subject of a major motion picture, titled only by his uniform number.  Once a season, major league baseball has a day where every single player wears his number 42.  Every other day of the season, no one in all of professional  is allowed to wear the number 42.  He deserves all of this, no question.  But what about the players who integrated the other sports?  For that matter, the people who integrated other non sports areas like medical schools, courtrooms, board rooms, and so on.  There are other Jackie Robinsons. One of them was a teammate named Kenny Washington, who would break the color barrier in pro football, with a lot less fanfare.

Washington was born August 31, 1918 and grew up in Los Angeles.  He was primarily raised by his grandmother and uncle, who was the first black policeman in Los Angeles.  He was a multi sport star at Lincoln High School, and then would be recruited to play football and baseball at U.C.L.A.  (U.C.L.A. deserves a lot of credit, as they had four African Americans on their football team, when there were less than 50 playing in the entire country.)  He would be teammates in both sports with Jackie Robinson.  Many thought that Washington was actually the better baseball player of the two.  In football, Washington would lead the nation in total offense his senior year, but not be named a first team all American because of his skin color.

After college, legendary Chicago Bears Coach George Halas coached Washington in an all star game.  Halas was impressed, and wanted him to become a Bear.  Halas took Washington to Chicago with him, and they signed a contract.  This was a year before Jackie Robinson broke baseball’s color barrier.  Sadly, the other N.F.L. owners would not permit it.  The resistance was  led by George Preston Marshall.  Marshall was the original owner of the Washington Redskins, and the man that gave that franchise it’s name.  He was adamant that African American Players not be allowed in the league. In fact, the Redskins were the last N.F.L. team to integrate. They did it in 1962, when the league forced them to.

Kenny Washington, although one of the best players in the country, wasn’t allowed in the N.F.L. because of his skin color. He was relegated to play for the semi-pro Hollywood Bears of the Pacific Coast Football League for the next four years.  He also became a Los Angeles Police Officer and part time coach at U.C.L.A.

In 1946, the N.F.L. wanted a team in Los Angeles.  The Cleveland Rams agreed to move to L.A., and play in the Los Angeles Coliseum.  The Los Angeles newspapers reacted to this by publishing articles nearly every day exposing the hypocrisy of a stadium built and maintained by tax payer dollars, including the tax dollars of minorities, which would host a team that did not allow anyone but white players to play for it.  The commission in charge of the stadium agreed, and said it would not allow the Rams to play there unless they integrated. The N.F.L. gave in, which paved the way for the Rams to reach out to hometown hero, Kenny Washington.  They also signed Washington’s old U.C.L.A. African American teammate Woody Strode, so Washington wouldn’t have to face the fight alone.

Unfortunately, although still great, Washington was had undergone five knee surgeries and was not quite the same player he was when leaving college.  He played for the Rams for three seasons. He and Strode were faced with bigotry on and off the field the entire time.  When they went on road games, they were handed a hundred dollar bill and told to go find “suitable accommodations” away from the team.  They were taunted with racial slurs by fans and opposing teams during games.  One time, at the bottom of a pile, an opponent pulled chalk from his back pocket and rubbed it in Washington’s eyes.

Kenny Washington is in the College Football Hall of Fame, but not the N.F.L.’s.  The Rams never retired his number. In fact it was worn by Quarterbacks Chris Miller and Kurt Warner.  He has a small plaque in his honor at the Los Angeles Coliseum.  If you ask a baseball fan today who Jackie Robinson was, they will give you a quick answer and a sort of “no duh” look.  Try and see how many N.F.L. fans you know can identify Kenny Washington.

History chooses its stars with little rhyme or reason sometimes.  Unfortunately, Kenny Washington has gotten pushed to the back of the stage.

Let’s work on that. 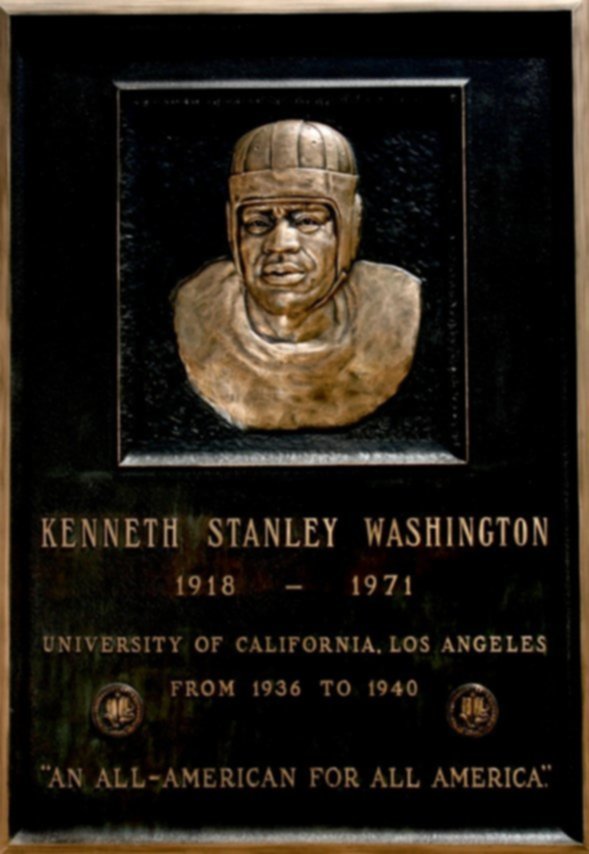 2 thoughts on “Happy Birthday to Kenny Washington, the First African American in the Modern N.F.L.”