Three summers ago, a beautiful movement took the internet by storm: The Ice Bucket Challenge.

Pete Frates was a former baseball player diagnosed with ALS, or Lou Gehrig’s disease.  Two of his close friends came up with the idea for a way to use their friends illness as an opportunity to help all of those who suffered from this terrible disease. Participants either poured a bucket of ice water over their head, or made a donation to organizations fighting ALS.  Many did both.

Facebook and twitter became flooded with people doing the “Ice Bucket Challenge”.  Star athletes and entertainers did it.  Great grandmas did it.  Children did it.  George Bush even challenged Bill Clinton to do it.  Pretty much everybody did it.

Three years later, the Ice Bucket Challenge is credited with raising over $250 million dollars to help in the fight against ALS.

Scientists who received funding from the challenge have discovered the gene associated with the disease, and say they would not have without the help of the ice bucket challenge.  Drugs have been developed to improve lung function and life expectancy of victims of this killer.  There are researchers all over the world now fighting A.L.S., funding by dollars raised by the “Ice Bucket Challenge.” 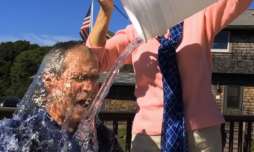 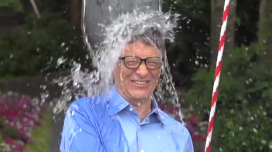 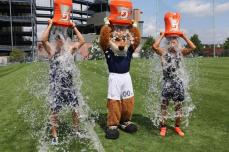 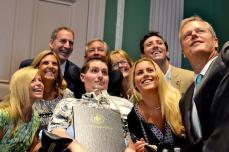 Just yesterday, Pete Fratas was on hand for the signing of a bill to make the first week of every August officially the “Ice Bucket Challenge Week” in the state of Massachusetts.  He and his family took a selfie with the Governor to celebrate.

During the summer of 2014, there were critics.  They said that people doing the “Ice Bucket Challenge” were just trying to get attention for themselves.  Naysayers said it was all for show, but would have little impact.

As is often the case, the critics were wrong.

In 2017, social media has often become an ocean of negativity, falsity, hate, and divisiveness.  The “Ice Bucket Challenge” was a beautiful island of activism, love, and healing.  It showed us the power we have when we work together.

Let us jump out of that nasty water together and build more beautiful islands.